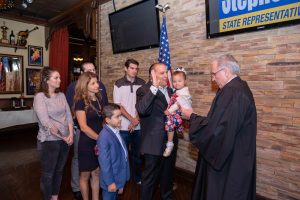 EDISON PARK, IL – At a public meeting today, local, city and suburban leaders across the 20th legislative district unanimously selected Rosemont Mayor Brad Stephens to serve as their state representative. On June 17th, longtime State Representative Michael McAuliffe announced his resignation initiating a process set by state law that requires the appointment of a successor within thirty days to fill out the remainder of the term. State Representative Brad Stephens was surrounded by his family, friends and supporters and was sworn into office by former Democratic state senator now Cook County Judge John Mulroe.

“It is an honor and a humbling experience to be selected to serve my neighbors as State Representative for the 20th legislative district,” Stephens said. “I intend to bring the same passion and results-oriented mission to this position that I have to every job I’ve ever held. With my experience and the bi-partisan relationships I’ve developed, I can hit the ground running in Springfield. As state representative, I’ll take those lessons and relationships that I’ve built as mayor and continue to champion fiscal responsibility, lower taxes, and vital services for our families and seniors. I will continue to fight for working men and women across the 20th district.”

House Republican Leader Jim Durkin welcomed Representative Stephens to the GOP caucus and said he would be a valuable addition. “Brad Stephens will be able to deliver for his district on day one. His deep knowledge of state policy and its impact on local communities will be valuable to the Illinois state legislature and a welcome addition to the House Republican Caucus,” said Durkin.

As Rosemont’s Mayor for the last dozen years, Stephens’ track record of fiscal responsibility and economic development has resulted in balanced budgets, and fully funded pension funds. Under his leadership, Rosemont has become an economic development engine and destination for tourism and hundreds of businesses both large and small. Rosemont is also well known for delivering top-flight municipal services and great schools all while returning property tax dollars to homeowners every year.

Before serving as mayor, Stephens began his career as a carpenter and remains a card-carrying member of that union. In addition, he is a member of Chicago Stagehands Local 2, a labor union representing technicians, artisans and craft persons working in Chicago’s entertainment industry. He worked in nearly every major department in the Village of Rosemont, served as Trustee and later as a supervisor of Leyden Township. In 2007, Stephens was sworn in as mayor following the passing of his father. He has subsequently been reelected three times to the post.

Retiring State Rep. Mike McAuliffe whom Stephens replaces said his successor was well-equipped to step into the job. “In the 20th district, partnering with local officials, police and firemen, unions and business, is incredibly important. Brad Stephens understands effective leadership, and reaching across the aisle to benefit constituents. I am proud to support him as state representative for the 20th district,” said McAuliffe.